Hera is totally my favorite goddess. 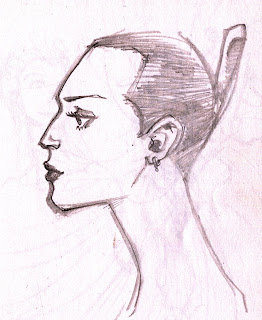 I think she gets a bum rap in a lot of the stories, especially in the myths of Heracles. Anyone who's studied the ancient world knows that Hera was an incredibly important goddess; Zeus himself seems to have been overshadowed in actual cult back in the day. Starting with Homer and later chroniclers she begins to be depicted as the jealous, shrewish wife; Homer was sexist.

Heracles, incidentally, translates to "The Glory of Hera", which will be the name of volume of The Olympians that deals with Hera. I'm going to explore Hera's relationship to the heroes, both antagonistic (Heracles) and protective(Jason), as well as a look into what it's like to be married to the most infamous philanderer in mythology. I think it should be very illuminating, and more than a little redemptive for a misunderstood goddess.

For Hera's appearance, I wanted her to be extremely beautiful (Zeus did choose her as his queen) and also a little arch and severe. To that end, I gave her the tightly-drawn back hair, evocative of a peacock's crest. The peacock is one of her symbols in ancient depictions, so I additionally wanted an echo of that.

Hera gets a bad rap, but she earned some of it. My fave is Hephaestus, the crippled craftsman. Hera threw him from Olymous as an infant. But he eventually got her back...

Will the ol' sticky chair. There's actually a couple versions of that tale, one where Zeus throws him from Olympus for taking Hera's side in one of their quarrels. I'll be featuring both versions of the tale in Hephaistos' book.

I am so thrilled to discover that you have a blog! As you know I love your books and have featured them on my blog as well (once the holidays are behind us they will be on my 'books I recommend' once again).

I have been teaching my 1st grade students the stories from Greek Mythology for the past three years and they have created some amazing art work based on their visualizations of these characters.

Anyway, I just wanted to say hello. I will add you to my blogroll so I can return. Hope you are able to make it back to PS163 this year. You have not shared "Uncle Bigfoot" with us yet.

Maybe she wasnt really that schrewish... Homer was definitly a sexist. Maybe she gets described that way to emphasize Zeus manhood and conquests, and to make her less of a threat to his powers.
As the archetype of a betrayed woman, its comfortable to make her evil. But what if she wasnt, what if she said: hey hun, if you think f-king around is your path to happiness, parden me while i take care of other matters. It hurts but you are who you are, dont come to me for forgiveness. It's your choice. That would be more in the line of a strong woman, dont you think?