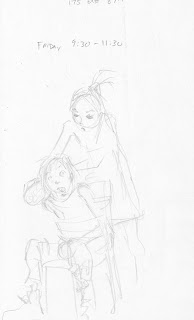 Here we have pictured the already introduced Exley tending to young Horlick. Horlick, the final of the four main characters of Ball-Peen Hammer, is a feral child growing up in the ruins of the city whom Exey tries to take under her protective wing. In the script he's described as being thirteen, and this first sketch is my attempt at drawing that awkward age. 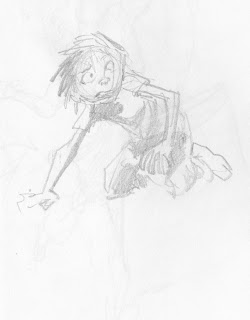 Drawing children convincingly in comics is a tricky proposition. SO much of the impression of a child comes from their boundless energy-- I find that a lot of artists, particularly those who use a lot of photo reference-- tend to draw strange, deadened little creatures rather than kids. I attempted to rectify this problem by "cartoonizing" (my own word) Horlick a little. Sure, he's a caricature, but then, what kid isn't?