Todays; Drawbridge topic was flowers. I used that as a departure point to explore the roots of St Valentine's Day.

So how did a Roman Catholic Saint, of all people, come to be associated with the holiday intended for the expression of intense physical love? Good question.

Like many modern holidays (I'm looking at you, Xmas), what we celebrate today is just a patch early christians threw on over pre-existing pagan rituals (Saturnalia, anyone?). That explains why, say, we celebrate the resurrection of Jesus with eggs and bunnies-- the christian element was overlaid on a pre-existing springtime fertility ritual.

St. Valentine's day is a similar case. Nobody is sure which St Valentine we're celebrating exactly (there were at least three) but his day is an overlay of the ancient Greco-Roman festival of Lupercalia, in which was celebrated both the holy marriage of Zeus (Jove) and Hera (Juno), as well as in Rome the founding of their city (Romulus, Remus, wolves, "Lupe"-- it's all connected). There was all sorts of courting between young folks of both sexes, and it was generally very frolicky. Lupercalia was a very, very  ancient festival, and it had replaced (more absorbed, really) an even more ancient one, Februa, which, you may guess, is where we get  the name for the month of February. Now you know, and knowing is half the battle.

My drawing is the sacred couple themselves, Zeus and Hera, in embrace, and just to keep this thing nominally on topic, there is also a water lilly, one of Hera's sacred flowers. 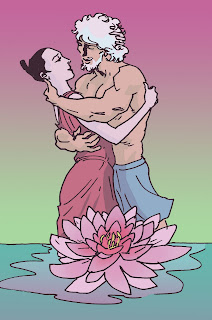