On October 7th, the new boxed set of the first 6 Olympians books is officially released.
That's six volumes, and a poster, so for each day leading up to the 7th I'll release a post detailing sketches, anecdotes, alternate drawings-- whatever I can find, really, for one of the books in the series. Today, I'll be covering the fifth book in the series,  Poseidon: Earth Shaker.

Today's installment is about the moody god of the sea, Poseidon.  For a long time, Poseidon: Earth Shaker held the record for being the most difficult volume of Olympians to create. It's since been surpassed by the upcoming Ares: Bringer of War in terms of difficulty to draw, and the upcoming Apollo: The Brilliant God in terms of writing, but for an all-around tough experience Poseidon rules supreme. The book was rewritten by me three times before I even showed it to the folks at First Second. 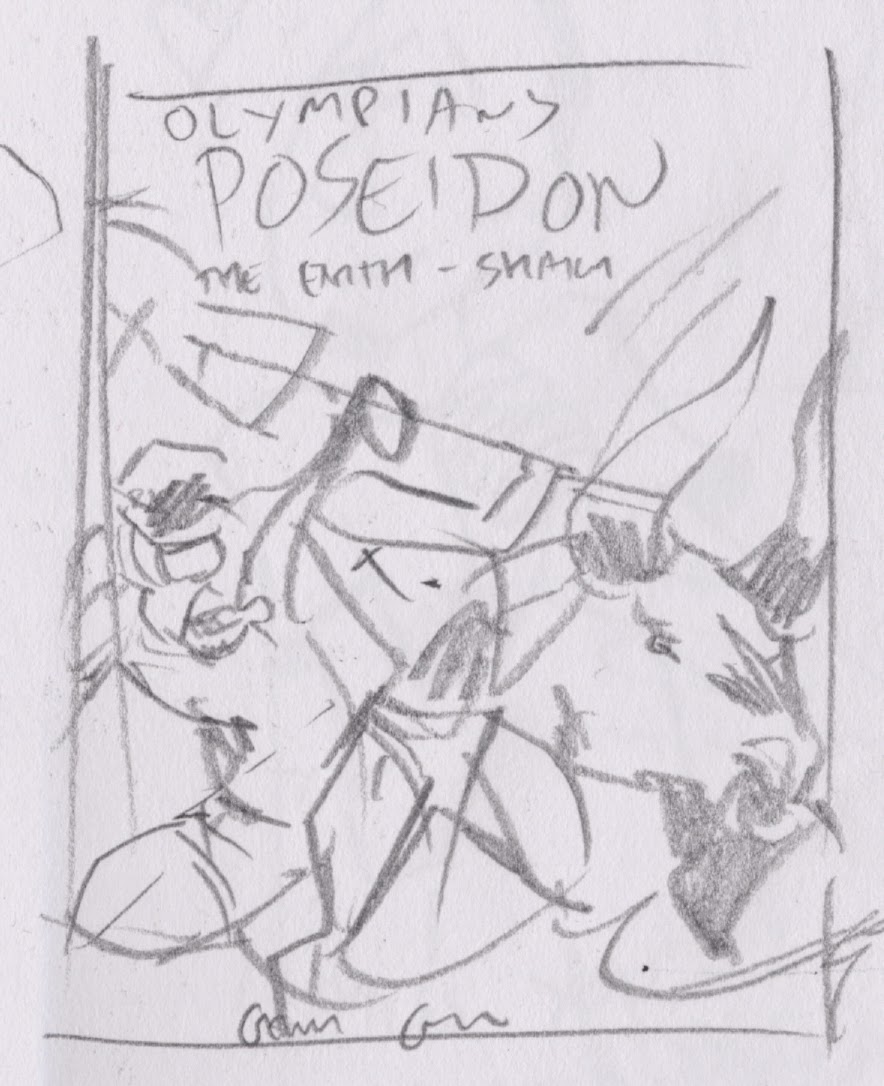 Poseidon is a tricky god; he appears in numerous myths, but almost never as the main character. His temperament is all over the place, so I decided to write Poseidon: Earth Shaker from the point of view (and in the voice) of Poseidon himself. 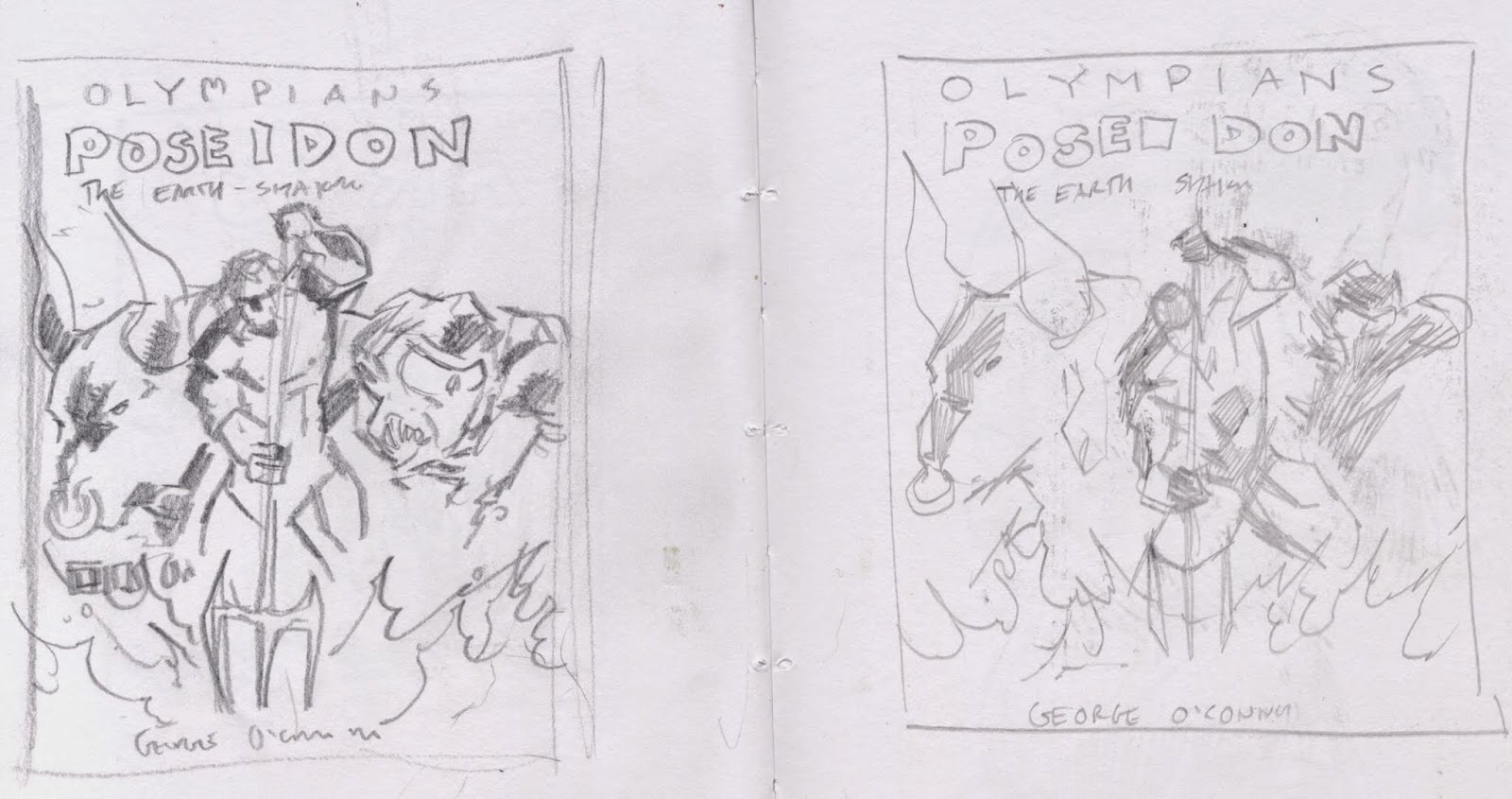 Incidentally, check it out-- these early sketches have the subtitle Earth-Shaker on them already. If you've been following along, you've seen how my proposed subtitle tends to get changed by editorial. Poseidon is the second (with Athena: Grey-Eyed Goddess being the first) of my books to not have a subtitle swap. You can also see I arrived at the more-or-less final cover design rather quickly.

This is interesting-- I didn't even recall this. Above is the original black and white art I produced for the cover of Poseidon: Earth Shaker. However,  upon a closer look I see it's a completely different drawing than the final cover. Some elements, like Polyphemos and the ruptured ground, are very similar, but the Minotaur is completely different, and the figure of Poseidon is kinda awkward.


Sketchbook doodle of Poseidon made while I was assembling ideas for this book. 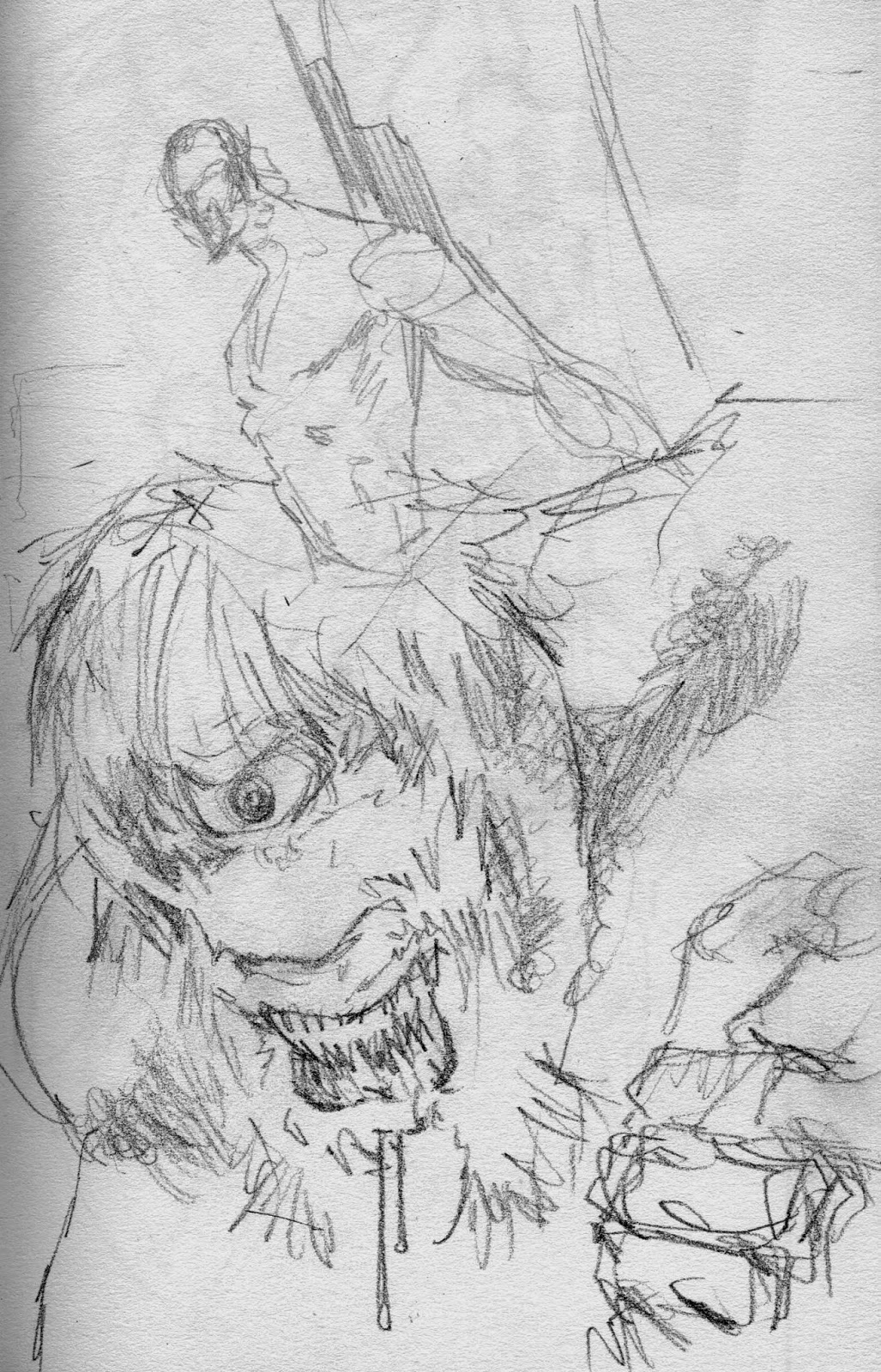 A really gruesome early sketch of Polyphemos, and Odysseus lashed to his mast as he listens to the Sirens, a scene in early drafts of Poseidon that got cut. 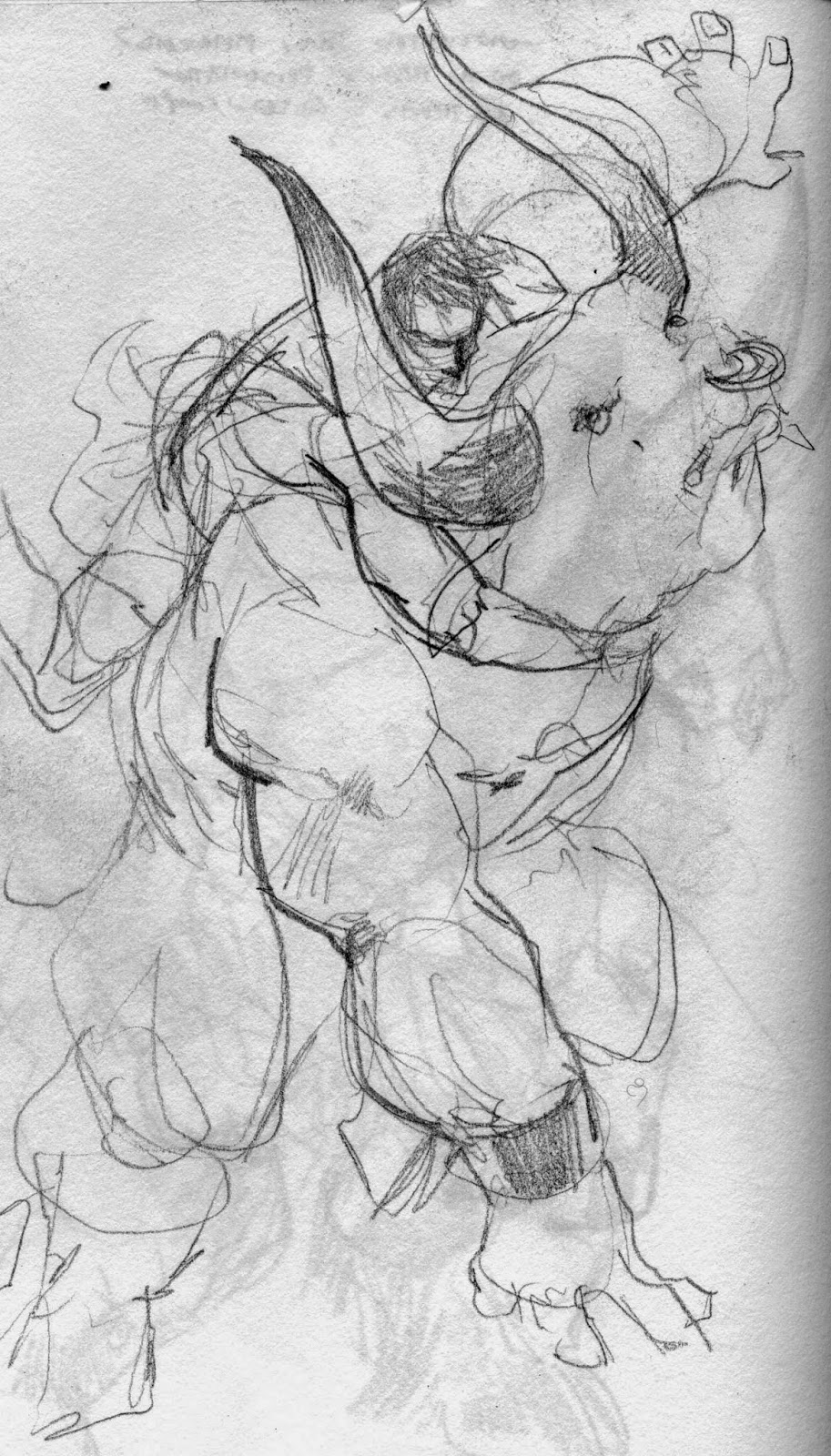 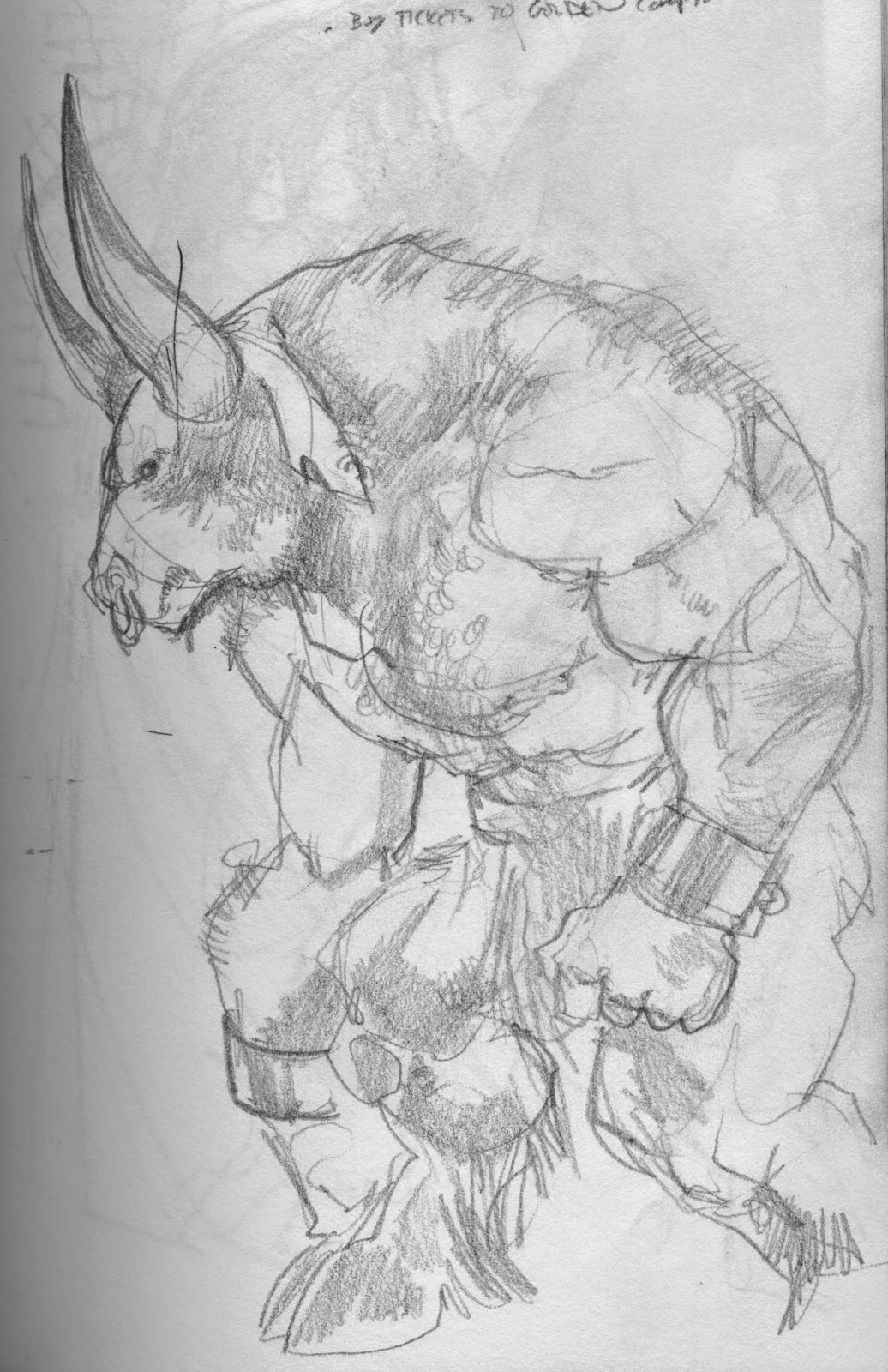 Couple of shots of the Minotaur, my favorite monster from childhood. The hardest cuts I had to make in this book were of the battle between Theseus and the Minotaur. I originally had an enormous battle choreographed which I distilled down to a few key scenes. 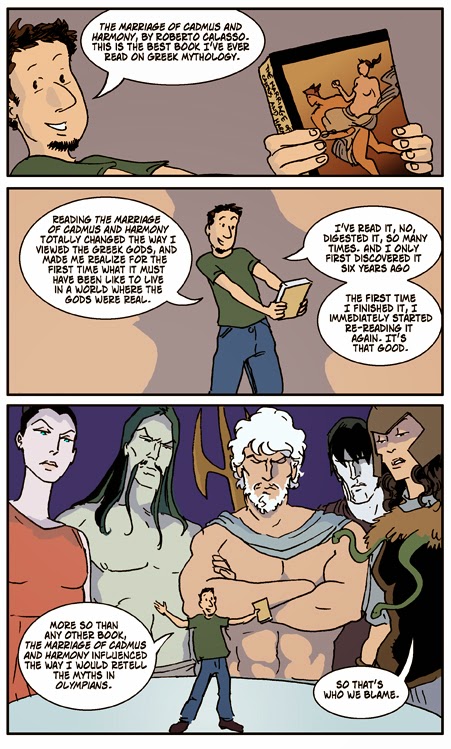 My behind-the-scenes materials for Poseidon are rather slim, so I'm sharing some ancillary material here. Above is a comic I drew for Shelf Awareness's Book Brahmin blog in promotion for Poseidon. Check out the rest of the comics I drew for them HERE.
Above is a drawing made by the uber-talented Becky Cloonan while she borrowed my desk one day at the studio. I was working on Poseidon at the time so she drew her own version of my design. It's pretty sweet, you'll agree.

A photo of me performing the true story of why Poseidon hates me, the text version of which will be a future post one day.


A screen capture of one of the video interviews I did with MTV Geek! in promotion of Poseidon. Check out the interviews HERE. 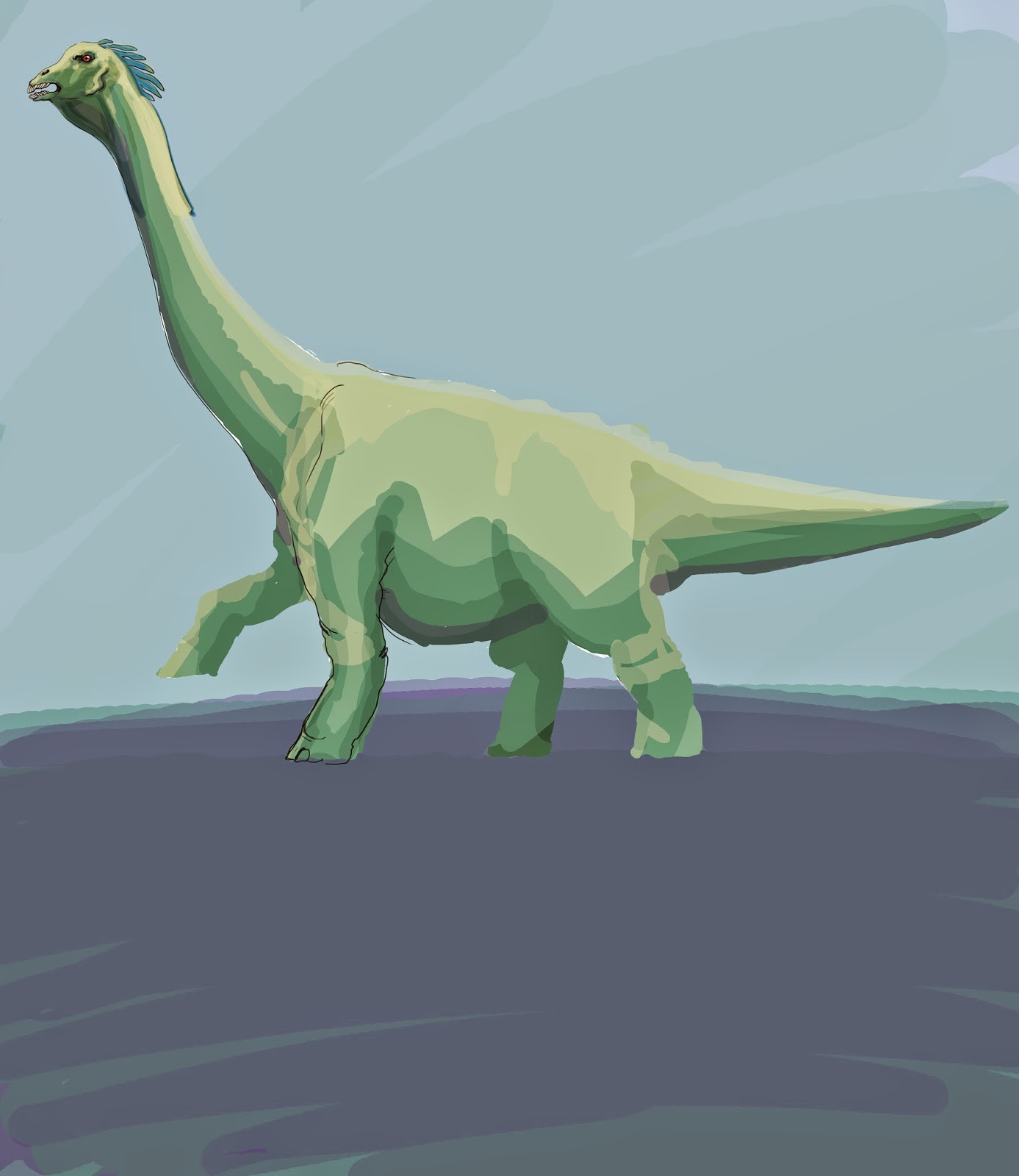 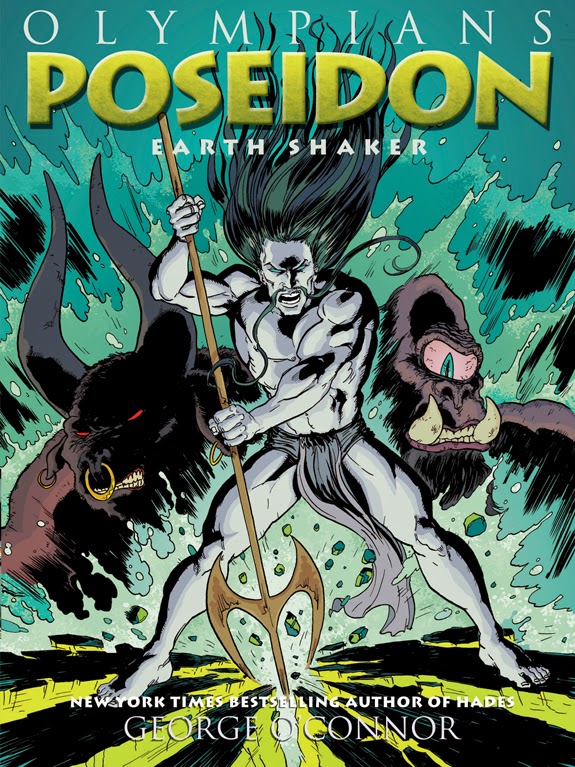 That's it for Poseidon: Earth Shaker. Join us tomorrow for a look at Aphrodite: Goddess of Love.