Yesterday a bunch of my studiomates ( Simon Fraser, Becky Cloonan, Tim Hamilton and Robin Ha) and I made a trek to the Museum of Natural History to check out their new Sauropod exhibit (along with pretty much every family in NYC with a kid under 8 years old-- gotta remember about spring break next time). The Sauropod exhibit was pretty cool, but it can't hold a candle to the permanent fossil collection, and we all made many cool drawings.

Here's some of my faves: 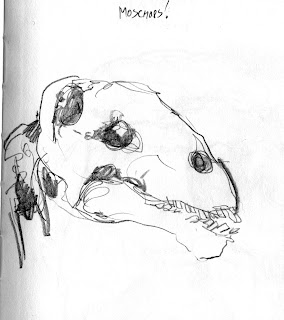 Because it was so crowded, we spent a lot of time in the less crowded mammal rooms, or as I like to call them, "failasauruses". This is the skull of a mammal-like reptile called Moschops, which is, like, the best name ever. Becky and I kept saying "Moschops!" all day after. Go on, give it  a try: Moschops! 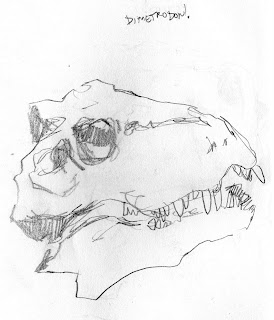 Another mammal-like reptile, the Dimetrodon.  These are the guys with the big fins on their backs. 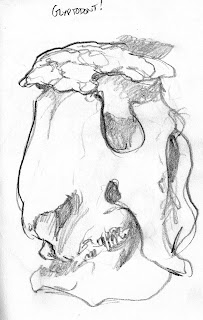 Another fun one to say: Glyptodont! These were huge armored mammals, like if a beaver and a turtle had a baby. That's armor plating on its skull, not a hair piece. 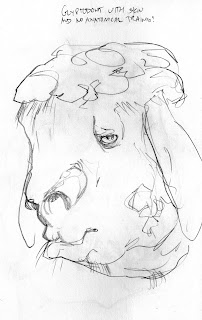 Becky thought it would be fun if we tried to picture the glyptodont with flesh on it. Mine looks like a lazy sheep. I hope to god she puts up hers because it was disgusting. 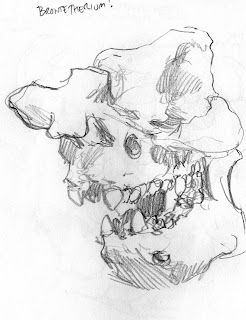 A Brontetherium, king of a huge rhino on steroids. I drew this because the skull had compressed strangely during fossilization and it looks like he's going "aduh!". Things that go "aduh!" are awesome.

After seeing the sauropod exhibit I decided to funnel some of new-found appreciation for them into this drawing of the Apatosaurus (the dinosaur formerly known as Brontosaurus). The neck vertebra a re really quite beautiful. I had to finally abandon this drawing because people were walking in front of me and I kept losing count of which vertebra I was on. 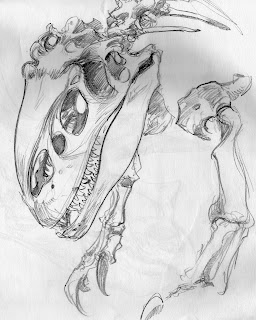 Allosaurus may not get the press of T-Rex, but dinosaur connoisseurs know that this is the cooler carnivore. Just look at the cool sweeping lines in its skull. Becky compared it to drawing a sports car, and she was totally right. 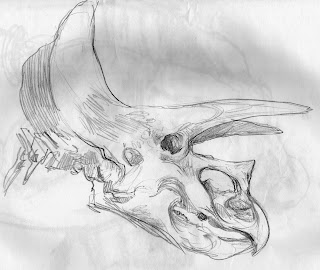 My favorite dino, Triceratops. So much so that when everyone else left (or was swept away by a crowd of 6-year old like Tim was) I stayed behind to behind to draw this. If I had a triceratops... you'd all pay. 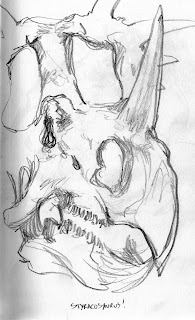 I also drew this picture of a Styracosaurus, a spikier but smaller cousin of Triceratops. 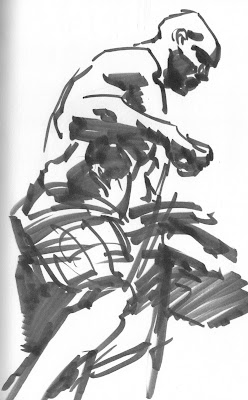 Finally, because I'm so HARDCORE! I joined Simon at Jack Demseys in Manhattan for the Big City Drink and Draw, where we drank and drew.  I borrowed Simon's marker to draw this picture of our extremely muscular model beating the hell out of a bar chair.

I thought I drew okay dino skulls while at the museum, and then when I got home I thought, wow...I really drew an abstract bunch of sh***y lines.
I may post them...Well see.

I'm taking today off as you would expect.