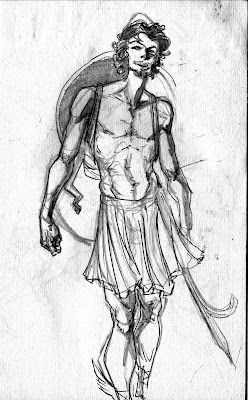 Of all the heroes of Greek Myth, I don't think any of them got so much of a helping hand as did our man Perseus here. He doesn't do boo without some sort of divine intervention. You have to kill Medusa? Here, take Hermes' winged shoes and sword, and Athena's mirrored shield so you don't have to look at her directly. That's not enough? How about we lend you Hades cap of invisibility, too, so Medusa won't even know you're there. You fly down, all invisible and cut off the monster's head. How's that?

Geez, with all that help, even I could kill a monster. In Grey-Eyed Goddess, I've decided to omit the invisibility helmet 'cause, man, that just ain't fair, but I have let the fact that Perseus gets an inordinate amount of immortal assistance affect my character design of him. Not quite a tower of muscle and sinew, instead he's got a little bit of the laid back surfer vibe going on, like he's a dude who doesn't have to sweat it too much because he's got friends in (very) high places.

I don't think any artist has ever thought about the design of these gods and goddesses as thoroughly as you have. Surfer Perseus (Surfeus?) is perfect.

I found this site using [url=http://google.com]google.com[/url] And i want to thank you for your work. You have done really very good site. Great work, great site! Thank you!

Who knows where to download XRumer 5.0 Palladium?
Help, please. All recommend this program to effectively advertise on the Internet, this is the best program!

Cool sketch. Perseus is a favorite hero of mine, and I really feel the same way. In my versions of the story, he only uses the Cap of Invisibility to escape Euryale and Stheno (they must've been just a tad bit ticked at him for killing their sister).