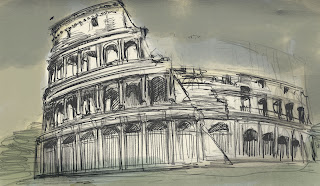 Sitting in a coffee shop just now with my girlfriend. I remark "Today's topic for Drawbridge is Civilization. What do I draw for that?"

She: "When I think civilization, I think its collapse", thoughtfully sips her coffee, "What about drawing a Roman vomitorium?"

Well, as it turns out the idea of a vomitorium being a room in an ancient Roman house dedicated to allowing revelers to puke and then continue binging is not true. Actual vomitoriums were passageways in ancient Roman amphitheaters and such, and were not used for people to puke in, but rather to abruptly fill and empty said spaces, hence, presumably, the term vomit. Still , however I arrived at it, it's hard to think of an image that better embodies the rise and fall of civilizations than the Colosseum of Rome, so here ya go.