So, I'm responsible for today's Drawbridge topic of "Don't touch it, it's evil" and as my subject, I chose to portray the embodiment of evil himself as played by David Warner in the classic film "Time Bandits". The line "Don't touch it, it's evil" is of course, from that film: it's what the protagonist yells to his parents right before they are about touch a concentrated lump of pure evil. They promptly do anyway and explode. 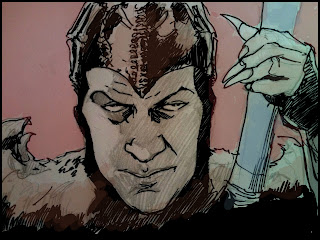 Time Bandits was and is one of my favorite films of all time. As a kid, I use to endlessly draw and redraw the final battle sequence between Evil and the various armies from different time periods. This is my first time drawing him since I've become an adult :)

Incidentally, still on the road with no scanner, just my camera phone and a laptop. I'm pretty pleased with what I was able to pull off, considering.