The Sailor Twain/ Journey into Mohawk Country Connection; kinda like The French Connection, but with less car chases

So are you reading Sailor Twain by Mark Siegel yet? Mark Siegel, in addition to being a ridiculously talented cartoonist and illustrator, is the Editorial Director of First Second, the publishing house that puts out my graphic novels. Sailor Twain, or The Mermaid in The Hudson is his online comic being updated every Monday, Wednesday and Friday. Recently Mark held a Sailor Twain Meet-up in the Flatiron building, a wine-tasting party for the new Sailor Twain wine(!).

Everyone who attended was given a small bottle like the one's pictured below. Once opened, there was a message inside, as befits a bottle.

My friend Joe Infurnari got a message in his bottle that was particularly interesting to me. Here's a scan of the text here: 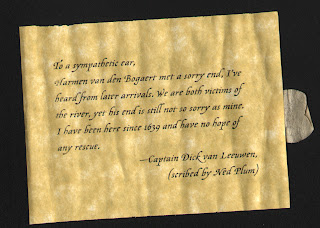 It reads: ‎"To a sympathetic ear,

Harmen van den Bogaert met a sorry end, I've heard from later arrivals. We are both victims of the river, yet his end is still not so sorry as mine. I have been here since 19639 and have no hope of any rescue.

The Harmen van den Bogaert mentioned above is the gentlemen whose actual real-world journal serves as the text for my graphic novel "Journey into Mohawk Country", published by First Second. The real life Harmen did indeed meet a sorry end, read all about it here.

Pretty awesome, huh? I'm pretty gosh darned psyched that Mr. van den Bogaert has made an appearance in the world of Sailor Twain (and I hope he makes an actual in-comic cameo at some point as well). I just had to share it with all of you.

Looking forward to it!