Today's topic on Drawbridge was "Sleeping Beauty",  so I decided to draw the big bad from the Disney classic, Maleficent. 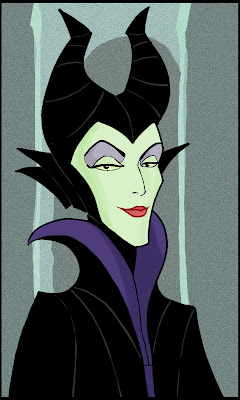 I didn't really add much of my own style to this, as the original design is so flawless. In my opinion, she's the greatest of the Disney villains. I know in some circles Sleeping Beauty is considered a flawed film: Its medieval-tapestry-inspired design is too stiff,  it has boring leads, it's too dark (true fact- every shade of paint used in the film was mixed with some black), yadda yadda.

I have my own theory for the criticism against it-- Haters gotta hate.

She used to scare the crap out of me as a kid. And I wasn't really a scaredy cat kid.

Yeah, she was pretty intense. And her dragon battle at the end was one of the coolest things the Disney Co. ever animated.