I've had the interesting experience recently of rereading a book of my own, Journey into Mohawk Country, after having not read it for years. It's a strange experience, that, revisiting your own work after a long time away. I found I still liked it, and what's more, that I desired to draw something again in that style. Hence, today's drawing. 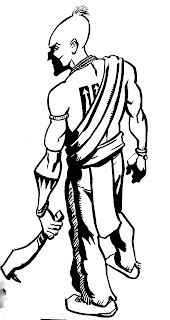 By about now, you're probably wondering why, with the topic of "man eater" I drew a picture of a Mohawk warrior. Well, history lesson time: The name Mohawk isn't even a Mohawk word. In fact, the people we call the Mohawk don't even have an "m" in their language. Mohawk is a Dutch derivation of an Algonquin word (the Algonquin were one language group of the Native Americans; the Mohawk belonged to the Iroquois) meaning "man eater" or "eater of flesh". Why? Well, the Kahnawake (that's one spelling of what the Mohawk call themselves; it means "people of the flint") did engage in a little bit of ritual cannibalization. A Mohawk brave might eat a small sliver of flesh from a worthy fallen foe, or even a tortured captive. It had the twofold effect of granting some of the vanquished enemy's power to the eater of the flesh, and it's hard to imagine a more effective act of psychological warfare than actually eating a part of your opponent. It's part of the reason why the Mohawk were such a dominant military presence in what would become the northeastern United States for so many years.