Warm up: DeMatteis's Blue and Gold

The topic today at Drawbridge was comics legend J.M. Dematteis.  In a conversation that might have precipitated this day in part, J.M. DeMatteis collaborator Mike Cavallaro and I were talking the other day about the immense impact Giffen and DeMatteis's Justice League had on me-- it remains, probably, my favorite run on any comic to this day. 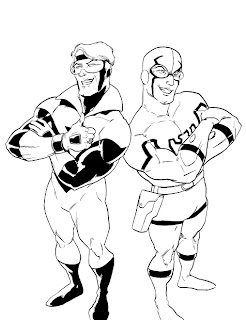 I knew right away that I wanted to draw the characters who have come to embody that period of the League more than any others, Blue Beetle and Booster Gold. Through the writing of DEMatteis and Giffen, Blue Beetle and Booster Gold evolved into the greatest best friend duo in comics. During the heyday of the JLI, the letter pages were always a twitter with rumors of a Blue and Gold spinoff series that never materialized. We finally, years later, finally kind of have it-- DeMatteis has been doing wonderful work on the ongoing Booster Gold series,  costarring the currently deceased Blue Beetle.