What a difference a few years makes.

We're not all that dissimilar in age here in the studios, just a handful of years separate us all, really, but the 12 inch G.I.Joe of Simon and Tim's was like an urban legend for me growing up. We knew it had existed-- grownups were always telling us G.I.Joe was this big when they were growing up, yet none of us had ever gotten a good look at one. There was a pit in the local woods where I grew up that contained the melted and mutilated remains, impaled on a tree stump, of a 12 inch Joe that we would go view on occasion. But for me and my friends, G.I.Joe was a little 3 and 3/4 inch team of guys with cool nicknames and specialties. Even better, they had a team of enemies, Cobra, who were all much cooler than the Joes. I definitely sided with the bad guys. 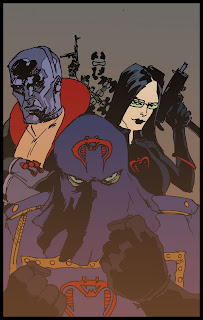 I was never a big fan of the cartoon which existed to sell us the little plastic men, but I was a huge fan of the comic, which was written by Larry Hama and had art by such talents as Michael Golden, Herb Trimpe, Russ Heath and others.