I really didn't know much about today's topic, Jane Russell, who just passed away recently; this is no reflection on her status as an icon, but rather more a reflection on my status as a philistine.

According to the info page on her that Tim Hamilton sent around with the topic email this morning, Ms. Russell had been discovered working as a receptionist by that craziest of rich guys Howard Hughes, who was conducting a nationwide search for a sexy lady to star in a western he was directing called The Outlaw. What's more, to quote the site :

"Hughes had his engineers design a seamless underwire brassiere, a breakthrough in bra science to lift Russell's 38-D breasts, leaving no visible support lines to interrupt the under-blouse contour of her bosom. It was the first practical "lift and separate" push-up bra, but Russell later said she did not wear the uncomfortable contraption during filming. Instead she wore her own bras, adding a layer of tissue paper over the cups to eliminate unsightly support lines. Hughes, despite directing the picture himself, never knew the difference.'

Fascinating stuff, to be sure. Here's a drawing I did of Ms. Russell as she appeared in The Outlaw. I'll leave it to you to determine what sort of support she's using. 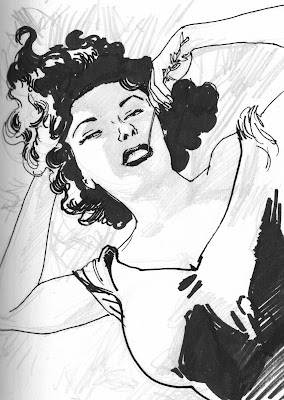 I have nothing to add, I just thought I should be here, representing UNDERWIRE. Actually, they are m-f-ing uncomfortable, but better than a four-hook wide-body old-lady over-the-shoulder-boulder-holder.

Apart from the trashiness of today's "superstars" they all lack what Jane Russell had in spades: star quality. Last Sunday, at the Oscars, most of those ladies looked like some Mary Smiths who had just washed their hair but didn't have time to blow dry. All of them are interchangeable. Jane Russell was unique. RIP