warm up- The Apple of Discord

My first thought upon learning today's topic was "The  Big Apple". My second thought was "Naw, I ain't gonna draw that". So here's my third thought, the Golden Apple of Eris. 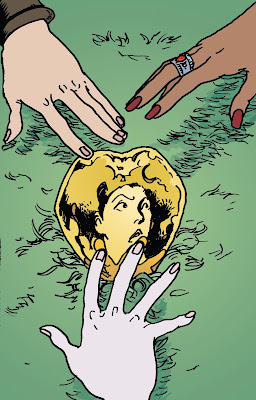 As you all of course know, Eris was the goddess of Discord, who, miffed at not being invited to a wedding, showed up anyway and threw her golden apple to the ground, shouting " To the fairest". Now this was a pretty fancy wedding, so many of the Olympians were present. I chose to depict the exact awkward moment when Hera, Athena and Aphrodite, each believing themselves to be the fairest of them all, all simultaneously reached for the Golden Apple of Discord. One thing leads to another, and this little incident eventually lead to the Trojan War and the more-or-less complete destruction of the race of Heroes.