The Sailor Twain/ Journey into Mohawk Country Connection, Part deux; kinda like the Rainbow Connection, but with less singing frogs

Devotees of this blog will recall a post I made about a month ago detailing an unexpected and hitherto unrevealed link between First Second Editorial Grand Poobah Mark Siegel's awesome ongoing webcomic Sailor Twain and my own historical graphic novel Journey into Mohawk Country (follow the link if you missed it).

Well, I'm a little late in reporting this (mainly due to the mother of all flu bugs laying me out cold since late last year) but in the December, 27th installment of Sailor Twain some very familiar faces made an appearance.

That's Harmen van den Bogaert, the author of Journey into Mohawk Country, flanked by his companions Jeronimus de la Croix and Willem Thomassen, as based on the below drawing by yours truly. Now we know what happened to our Dutch heroes after Journey concluded. Who knew Mermaids played a part? 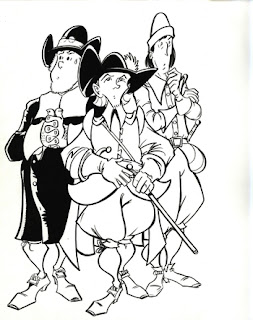 Pretty cool stuff, if I may say so myself. It's really great that Mark has woven these two tales together like this, and I'll bet Harmen van den Bogaert is pretty high atop the list of characters least likely to be featured in two separate graphic novels. If you're not already reading Sailor Twain, I hope this convinces you to start. 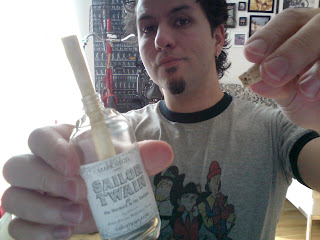