Today's topic on Drawbridge was inspired by a piece we read on Robot 6 about Bill O'Reilly using his considerable pulpit to harass an editorial cartoonist with whom he disagreed. 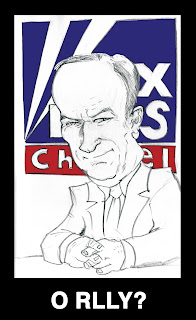 Regardless of your own personal political beliefs (and I'll say this for Mr. O'Reilly-- unlike some of the people with whom he shares a network, I believe he is not a shameless opportunist, and actually believes what he says) that's being a bully. And being a bully ain't cool.

I'll also say this about the man-- he's surprisingly fun to draw.

Maybe he did go overboard but the Cartoonist bullied O'Reilly first. No matter what side your on you should be able to tell that the cartoon made of him and the other political figures was frankly uncalled for and just not funny. The whole point was that you really don't see many comics making fun of liberal figures. Again I'm not taking any sides and I agree that O'Reilly did not take the appropriate response but in a way the cartoonist asked for it. But you don't have to agree with me. That's just my personal belief.

Love it. But really, I want to bully o'Reilly.